Let’s assume I shoot an object from a high tower horizontal to the earth’s surface. As far as I understand, depending on the velocity I will get different types of orbits. With decreasing velocity I will go from

My question is about the last orbit. If earth was transparent for the thrown object,…

Would orbit 5 be an ellipse with the center of earth being at the focal point furthest from the tower?

The answer is yes, even though it doesn't make sense to talk about "orbit" in your case as the object crashes on the surface of the planet.

As a thought experiment, though, you can think of the Earth as a point particle, and your object being shot in space far from the surface. Then, as its trajectory starts "bending" downwards, it doesn't hit the surface of the Earth and can propagate.

This is best exemplified in the following image from here, where the blue planet would be my "point-like" Earth: 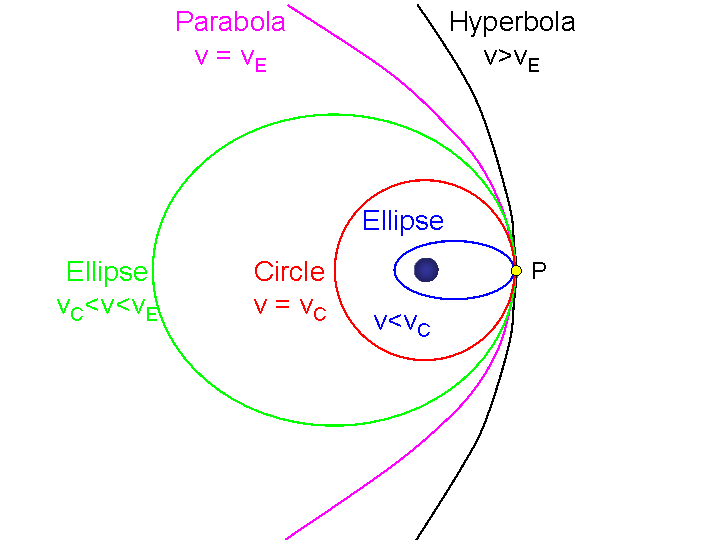 Out of completeness, it might be worth mentioning that for spherically symmetric vacuum solutions where GR effects are important, there is a correction to the Newton's potential that actually results in an innermost stable circular orbit ($R_{text{ISCO}}$), below which there are plummeting orbits.

Correct answer by SuperCiocia on December 25, 2020

transparent for the thrown object

Worth mentioning an alternative to point-mass orbits here. Assuming the Earth was literally transparent to the object, but all the mass was still there, distributed over the full volume.

Such force fields also have stable periodic orbits (actually the only other exponent than $r^{-2}$ that has them), but with some notable differences.

In practise, however, the density of the Earth is not uniform, so we don't have a neat $r^1$ force field for tunnel orbits.

The Functional Determinants in Peskin and Schroeder (Eq.9.77)

Is the nucleus smaller than the electron?

Can we write energy band of square lattice with vertical magnetic field?

Why does a black hole grow when it consumes matter? Isn’t this a contradiction?

What is the difference between the two?

Acceleration function of position and time

What is the velocity $u^mu$ in the stress-energy-tensor of a perfect fluid?

How can we use bulk-phase thermodynamics when gravity disrupts a phase’s uniformity?