Are turnout figures available at the German consulate level for the 2017 Turkish Referendum?

Among the approximately 3.5 million people with Turkish background living in Germany, about 1.43 million were eligible to cast a vote in the 2017 referendum on the presidential system. Among these, voter turnout was about 50%. Votes were cast in consulates or the embassy.

Overall, evet (yes) won the German-Turkish vote with 63%, with marked local differences. According to the Rheinische Post, in Berlin, evet and hyir (no!) were even (50-50), while evet had a far bigger lead in Essen (75%) or Düsseldorf (70%).

My question is if this discrepancy between different cities in preferences was accompanied by differences in voter turnout. Is there a breakdown of voter turnout by consulate?

Yes - this is available directly from the Turkish Supreme Electoral Council here.

The data for German consulates in particular have been analysed further in Germany's Turkish Voters - What Do We Know? by Thomas Krumm from the Turkish-German University, in which he provides this chart: 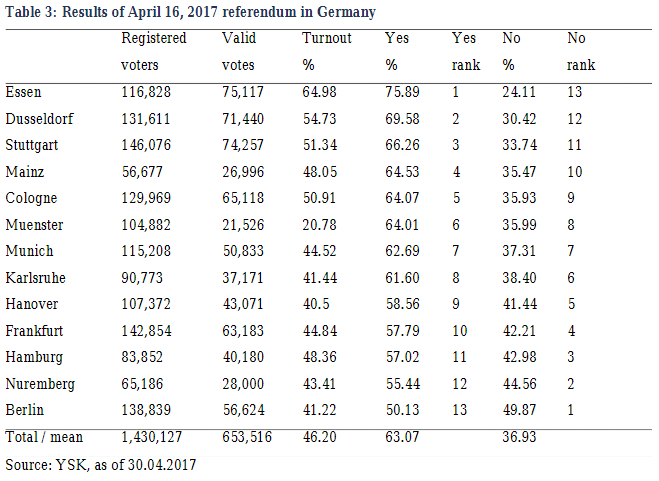 He also calculates the Spearman's rank correlation coefficient between turnout & 'Yes' vote at the consulate level, finding a positive correlation (0.654, sig. 0.015). This supports your hypothesis that the discrepancies in 'Yes' vote between consulates were accompanied with differences in turnout; generally speaking, the higher the percentage turnout, the higher the percentage of 'Yes' votes.

In the United States, why aren’t both legislative chambers involved in the Supreme Court confirmation process?

How is number of justices determined if the US Supreme Court is expanded?

Has there been a movement to make US judicial appointments apolitical?

Why do progressive candidates seem to better in inelastic districts?

Do any countries other than Azerbaijan have education requirements for a national elected office?

Was the U.S. IRS instructed to give Congress Donald Trump’s tax records; if so, have they?

What exactly constitutes a “Weapon of Mass Destruction?”

How effective are ports of entry in detecting smuggled drugs?

Why should public servants be apolitical?

Does it make a difference that senate republicans choose not to vote?

1  Asked on December 9, 2020 by fdkgfosfskjdlsjdlkfsf

What have been the dates on which the state of alarm in Spain for Covid-19 has been extended?

In which congressional districts were there more votes for the Democratic candidate in 2018 than in 2016?

What is Blue and White’s policy on the Arab rights in the (future) West Bank?

Why has India suddenly decided to change its non-aligned posture?

How do progressive US political thinkers explain anti-black police discrimination in cities where the population and government are majority black?