How does Bell measurement work in the teleportation?

In the teleportation protocol, the two parties share the entangled Bell State and it is implemented via a CNOT gate between the state to be sent (suppose Alice is sending the state) and the part of entangled Bell state Alice has. The CNOT gate creates another entangled state whose measurement Alice will send to the second party, say it's Bob, to perform the measurements accordingly. So if you assume the state to be sent is 1 qubit state after CNOT you will have a 3 qubit state (as Bell sate is 2 qubit state). Now Alice will measure the middle qubit which will be the part of classical information she will communicate to Bob.

So, you see the controlled-NOT acts as an entangling operator without affecting the first qubit (here $|phirangle$) and changing the entangled Bell state and hence its measurement outcome.

Correct answer by aditikatoch on December 24, 2020

Perhaps the following diagram helps to show what acts where. I think you've got a little muddled. 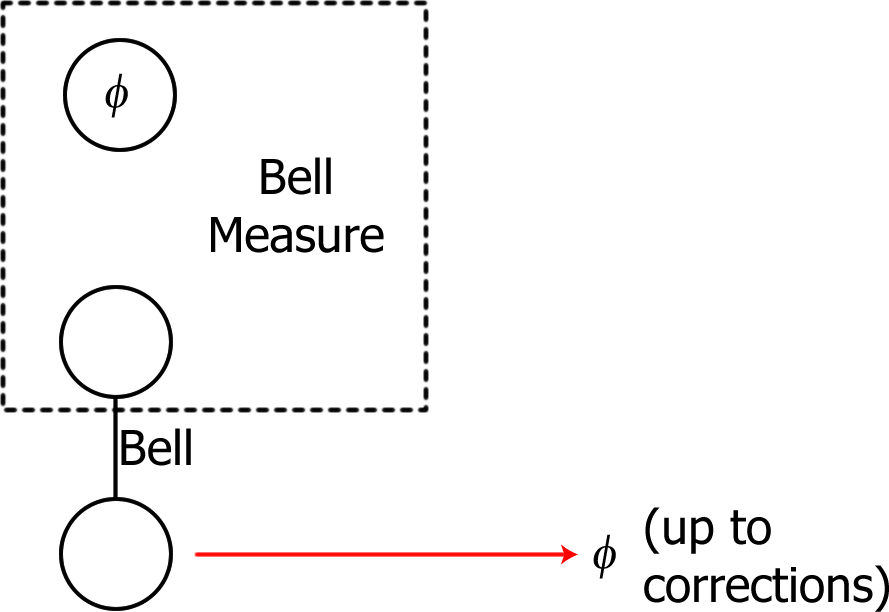 Does sending a qubit using a quantum network through some conventional physical medium mean it is not with sender anymore after sending?

Why do the controlled unitary operations in quantum phase estimation have $2^n$ in their exponents?

How are the two definitions of graph state mathematically equivalent?

Qiskit job not giving the right result after execution

What does the minus sign in the four bell states represent?

On Cluster States: Measuring in $|+rangle$ and $|-rangle$ basis vs. some other computational basis

What are examples of Hamiltonian simulation problems that are BQP-complete?

How to implement the Maximum or Minimum Searching Algorithm (QUMMSA) circuit in Quirk?

In the job tab, no histogram appears

Is there any way to assign a colour for a single gate in Qiskit?

What’s the point of Grover’s algorithm if we have to search the list of elements to build the oracle?

In Grover, how to implement oracle and amplification using Qiskit?

Making a Controlled-Z from a CNOT

Why is the local qasm_simulator significantly slower than the statevector_simulator?