Proper translations of "to cheat" here

I understand that questions that could potentially be answered by using the dictionary are frowned upon however there are multiple words that I see for cheating, which have overlapping meanings because English isn’t very precise. 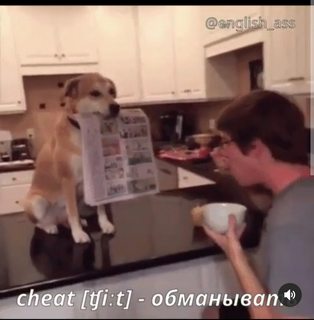 I’ve included this picture mostly because this comes from a Russian-English Telegram channel and it doesn’t appear to be right. In the video, the man is using the dog to read the newspaper and beneath that, it says, обманывать. обманывать to my understanding means to deceive someone through lies. Cheating also can be breaking rules in a game to gain an advantage which seems like жульничать.

In English, we may even call this a life-hack. Alternatively, it seems like I could use изменять as well. Is this correct?

A Russian verb that fits well the situation in the picture is изворачиваться, particularly the meanings

As for me, the best verb I would use for the picture is выкручиваться, especially in the expression выкручиваться из сложного положения. Note, that both изворачиваться and выкручиваться are associated not with deception, but with twisting and turning around in order to find a way from a complicated situation, these two verbs do not have connotation as negative as обманывать has.

I'm surprised nobody mentionеd "обдурить". Being closer in it's meaning to "обхитрить" and "обмануть", however it differs from a lie because in some cases it's just not about lying and, as such, in some cases it is a decent choice for translating cheating.

Other word I can think of - "наколоть"/"накалывать", like in - "наколоть систему" - wiktionary doesn't mention it but it has additional meaning "to trick someone/something".

"Cheat" in picture falls to case

Closest Russian word for a noun to that exact meaning of "lifehack" would be "уловка" - "trick", but word also got meaning of "deception". "смекалка" also seem appropriate, but it's common "cunning".

In slang we literally use transliterated "cheat" and "lifehack" today sometimes, in appropriate context. "Lifehack" became more formal thanks to media. Spelled "чит" and "лайфхак".

Rest meaning are pretty straightforward and there are numerous synonyms and expressions parallel to english ones.

Maybe they used the word 'обмануть' because the boy in the picture didn't want his meal to be eaten by the dog and gave him a newspaper to gag his mouth) If it's true 'обмануть' is ок, but I would use a synonym 'обхитрить' here. Because 'обмануть' is stronger and has a more negative meaning. Обхитрить is a derivative from хитрый (sly) and closer 'to trick'.

Another word that wasn't mentioned is мухлевать, мухлёж, which means "to cheat in games", it mostly applies to card games and such though. Although the format is unusual for Russian meme styles, so Russians seeing the picture and the word together might not immediately get what's going on and who is cheating in what.

A more common way to present this would be with words like находчивость, смекалка, хитрость, etc.

Alternatively, if you wrote читер there, most people would also immediately understand what you meant. Читер is pretty well established term used to refer to people who cheat at computer games and writing it as a caption to that photo would have a similar concept to writing cheat or something like hax in English.

I am not really sure what the "proper use of a dog" is, and how exactly it is improper to train it to hold the newspaper.

Russian has лайфхак which is a loanword from English.

Russian also has смекалка ("practical wit, ability to think outside the box and find unorthodox solutions to everyday problems by using available resources")

I would also note that it's not a common trope in Russian memes to provide fake dictionary articles, complete with pronunciation.

It's much more common to use the first letter of a word, similar to the way they do this in the children's books: Л — лайфхак, С — смекалка etc., as if the picture were an illustration of the word starting with this letter.

Сan one use multiple который clauses in a single sentence?

How can I understand this puzzling dialogue with “ну я имею в виду вообще”?

How is the choice made by Nicholas II between “также” and “так же” in his Language Manifesto of 1900 correct?

What does “Вот ведь” mean here?

How can I say “start both hourglasses” in Russian?

Can “ты ещё нас всех переживёшь” have a positive connotation?

Pronunciation of е in different words

How to say the difference between two things

How to elegantly say in Russian, “He was never to get what he wanted or, at least, what he said he wanted.”

Using вести/водить when talking about driving

Is “Утерянные победы” really a good translation of the title of Manstein’s book “Verlorene Siege”?

Proper translations of “to cheat” here