In a recent test I had to translate the following:

"Bring the cat to the verandah."

"It is already lying there."

My translation was marked as failed, and I got zero points for that part, but no explanatory comments were provided.

For some reasons that are too long to explain, I find it impractical to approach that particular teacher and ask him about the matter.

I did my best to sort out the issue on my own, but failed. The literal meaning seems to be exactly the one I provided, and Google Translator offers essentially the same translation. There is no context at all, as the above excerpt of two sentences was given per se as a separate translation task in the test. I thought it could be some Russian idiom, but could not find any.
My original translation seems to make perfect sense, and I do not see even a slightest inconsistency or anything indicating that my translation could be wrong. The task seems to be very easy and straightforward, and I am at a total loss as to what I did wrong.

I hope that you as native speakers can kindly help a humble confused student. What did I do wrong?

First of all, you translation is correct and I would not fail you for that.

That said, да уж лежит там is a peculiar, if grammatically correct, to put "it's already lying there" in Russian. Russian does not omit pronouns as easily as, say, Romance languages do.

There is a chance that this was a trick question, and уж in this context meant "grass snake". In this case the "correct" translation would have been "but the snake is lying there".

However, Russian does not usually word this idea this way either.

Again, I don't know why exactly your professor failed you. Your translation, given no other context, is correct.

Correct answer by Quassnoi on October 4, 2021

First phrase uses "отнеси" which is an imperative and be translated to "Take to/away". While "verandah" is direct analog of Russian word semantically, it's less commonly used in some English-peaking areas, where it becomes just a "porch".

I have no idea if it was intentional, but the answer can be read "But grass snake is lying there" as a pun and grammatical joke because formal speech would not omit pronoun in such case, but it would take a couple of minutes for a Russian to register that. First attempt would be read as awkward "But it is already there". If this was meant as a pun, it's completely untranslatable as most of homophonic puns.

For me your translations seems correct, at least in general.

I'm pretty sure there is nothing about snake. Also both кот and кошка can be used as generic cat, not only as male or female cats. I suppose that cat is more correct translation than tomcat.

But there are some moments.

Bring the cat to the verandah.

"Bring" is "принеси". "Отнеси" - move away to some place and let it (temporary) to be there for one of the purposes: stop him from interfering us or find and place there to know where he is. I would use take or put instead, but I may be wrong as have no such good spoken English. Note that according to the next sentence the cat is not together with speaking people, so it can't be "take away [to prevent interfering]", it should be "find and move".

"It is already lying there."

In the context of previous sentence and using "да уж" for me is seems more like "already done" than that the cat came there himself and lay down. But it's also possible that she have accidentally seen the cat there and haven't placed it herself. But anyway she knows that currently the cat is there. Лежит may be treated as a proof of the fact that he made it himself, as it is somewhere near sleep and you can't guaranty he is lying if you put him, but actually I'm unsure.

I'd also like to move lying to the end as the most important is placement, not the pose. I'm unsure whether such word order is correct in English, but let's try :)

My translation would be:

- Carry the cat to veranda.
- He is already there lying.

It may be not perfect, but if I place it in Google Translate from English to Russian, it seems very similar to original: 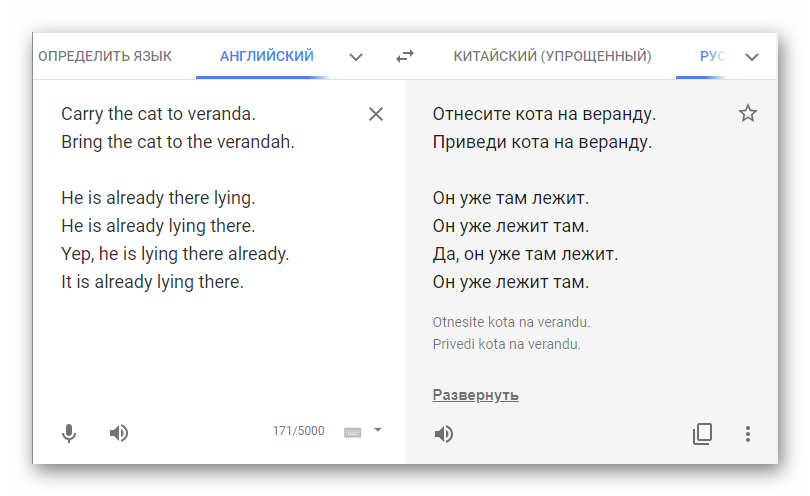 Note that adding "Yep" actually changes the sense and comma appears. I think, it's incorrect as it's agreement and the actual reply is "No, that's not needed". Maybe you can add opposite "Nope" instead: "Не, он и так там".

After I wrote all these things, seems like the only important difference is carry vs bring. Please comment, is it really so or there are some better translations of according to the other points I've wrote.

You already have more or less consistent answers for the first sentence.

Except, it is clearly about a tomcat (a male cat) and not a cat in general. In Russian, "кот" means a tomcat, it is "кошка" that may mean either a female cat or a cat of unspecified gender (see ex. here).

Missing the context, for the second sentence, I would consider the following:

If it was about the snake, it would be "Уж лежит там" (without "Да"). Or even "Уж сидит там" (yes, Russians say "сидит" for presence even for something that cannot sit or stand on feet).

Quassnoi suggested in his answer that the key might be the homonym "уж", which can mean "already" and "grass snake," and this possibility made me so pissed off that I got brave enough to sent an email to the teacher.

He was quick to reply and elected to respond in Russian:

So as far I as I understand, my translation should have been like this:

"Carry the cat out to the verandah."

"But it is already lying there." (The translator's note: There is an alternative interpretation, "But a grass snake lies there.")

Meaning of “Оставайтесь инкогнито” in this context

The verb слышать for finished action

Do Russian speakers in the former USSR countries use patronymics?

What is the Russian word that sounds like “bleen”

Pronunciation of “I live with my family”

What are the rules of the locative case?

When and why did Asian and Southern people start to be called “чурки”?

When is “это” declined?

What is хлеще the comparative of?