Was there a Parselmouth before Salazar Slytherin?

Was Salazar Slytherin the first Parselmouth, or did somebody else use it before him?

I’ve read the books, but I can’t find any examples.

Yes, Herpo the Foul is a Parselmouth who pre-dates Slytherin.

From Fantastic Beasts and Where to Find Them (emphasis mine):

The first recorded Basilisk was bred by Herpo the Foul, a Greek Dark wizard and Parselmouth, who discovered after much experimentation that a chicken egg hatched beneath a toad would produce a gigantic serpent of extraordinarily dangerous powers.

According to Professor Binns in Chamber of Secrets:

You all know, of course, that Hogwarts was founded over a thousand years ago - the precise date is uncertain - by the four greatest witches and wizards of the age.

The books are set in the 1990s, which means Slytherin would be active around the tenth century. This means he almost certainly didn’t overlap Herpo the Foul, and so Foul is a Parselmouth who pre-dates Slytherin.

Edit: As Anthony Grist points out in the comments, this only says Greek, not Ancient Greek. I read Ancient Greek in the HP Wikia entry, and conflated the two. This is confirmed in his chocolate frog card on Pottermore:

Herpo the Foul was an Ancient Greek wizard and the first known creator of the Basilisk.

Note that most known Parselmouths in the HP universe are connected to Slytherin. (The Gaunts, Voldemort, Harry by proxy to Voldemort.) Indeed, JKR confirmed in a 2007 interview that the ability has come down via Slytherin (emphasis mine):

JKR: I don't see it really as a language you can learn. So few people speak it that who would teach you? This is a weird ability passed down through the Slytherin blood line.

Correct answer by alexwlchan on October 24, 2020

According to the Famous Wizard Cards seen in the video game "Harry Potter and the Chamber of Secrets", Paracelsus (1493-1541) is...

Obviously this conflicts heavily with later canon mentions of Salazar Slytherin and Herpo the Foul but it is worth noting that JKR did write the cards seen in the EA games, even if the cards themselves aren't strictly considered canonical:

Q: Did you actually write the information that ended up on the Famous Wizard cards? For that matter, what about the spells in the films? Did you invent those or did Steve Kloves? And why were new incantations created for the movie in the first place? (Example: "Incendio" to "Lacarnum Inflamari"?

JKR: Yes, I wrote the information on the original Famous Wizard cards. As you have notices, a few of them have now popped up on the 'Wizard of the Month' cards on my website desk. 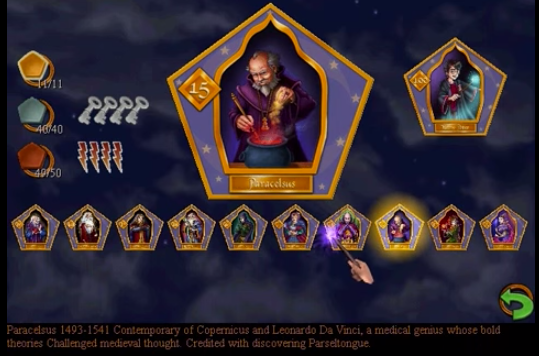 Fantasy novel: dueling sorcerers and a damsel in distress

How did Thanos know the Tesseract would be with Loki on the Asgardian ship?

How did Obi-Wan so easily defeat Anakin?

What flaw in the Matrix was Neo supposed to correct?

What am I expected to already know about Captain Pike?

Was a droid uploading into the Millennium Falcon Navi-Computer inspired by the old Han Solo novels?

Which manga was it that a boy went out to take revenge for a witch the kingdom executed?

Are there any known Sith from Yoda’s species?

What was the purpose of adding red backlights in USS Enterprise?

What are the Djinn from Clash of the Titans (2010) based on?

clash of the titans 2010  mythology

Did Arthur and Molly Weasley get married while Voldemort was in power?

What is the distribution of wand lengths?

What are the children of two Muggle-borns called?

Why was Hagrid sent to Azkaban?

Do standard definitions exist for dragon, drake, wyrm and wyvern?

Has anyone ever heard of a crazy interpretation of the original trilogy where Obi-Wan is really OB1 and a clone?

Why is the Mandalorian’s weapons locker on the Razor Crest so easy to open?