How to compand an OFDM signal?

Im trying to run a simulation of an OFDM system with convolutional coding and u-law compander on MATLAB. The problem is I dont know how to compand the OFDM signal. Do I need to do something to the signal before compressing it? Because value coming out of the ifft block is a complex number.

Edit: Here is the snippet of the code where I compand the signal. Am I doing it wrongly?

µ-law is defined for real-valued PCM signals only. You will either need to produce a real-valued signal containing OFDM as passband signal, either

General remark: Don't forget that you've got channel coding. It's often better to intentionally completely "delete" isolated subcarriers from extreme-peak OFDM symbols than to "make whole symbols slightly worse", as the former leads to a certain, but isolated, error, whereas the other has a chance of leading to multiple errors in the same symbol – which would, assuming there's no large interleaver at work, look like a burst error.

I think you'd want to read

on what they did and what their results are.

While you do that, look at Figure 5: 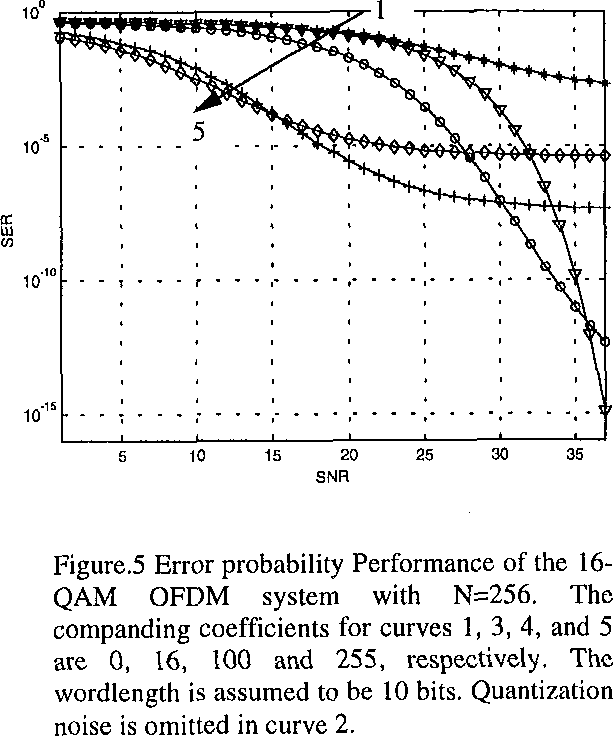 Notice how the second (⛛) curve is the uncompanded one. This looks like for anything but very high SNR, the companded curves are better.

and especially this paragraph: 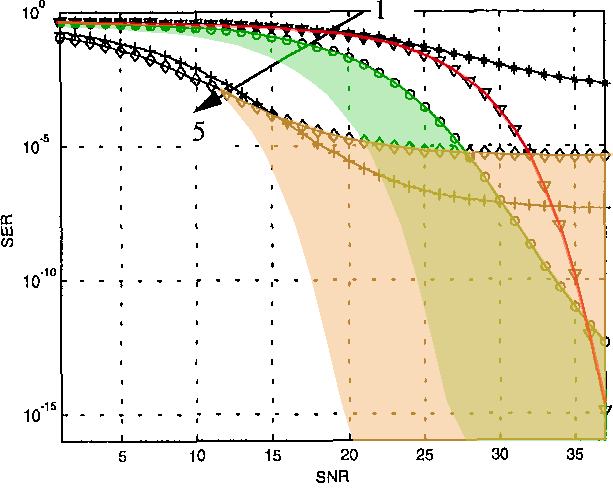 Look how the uncompanded signal (red line) is always better at the same power than the µ=16 companded signal, and how it's better for SNRs > 12 dB for the µ=255 case. I highlighted the amount that uncompanded is better than companded in green for µ=16, and in orange for µ=255.

If your SNR is below 12 dB, you get a SER > 10⁻³, which is a typical design goal for wireless communication; you might want to use a lower modulation than 16-QAM then, which will then typically be an 8-PSK or QPSK. Which is indifferent about amplitude variation – so instead of companding nonlinearly, you'd just look at the peak in your OFDM symbol and simply either drastically scale a few isolated subcarriers, or the whole symbol slightly. (which you do would depend on how steep the BER curve of your channel decoder is at that point.)

TL;DR: Literature research shows companding only works for low SNR. There, you might not be in a sweet spot for system design, so my expectations for companding to work are low.
Instead, I propose you generally rather design your FEC so that it can live with intentionally broken isolated symbols that you insert on purpose to reduce PAPR.

Answered by Marcus Müller on January 6, 2022

Terminology for instantaneous phase of magnitude component of complex signal

Does any paper use energy harvest to in the baseband?

What is the point of smoothing an FFT or spectral density plot, and how does that affect the noise floor?

How can I convert audio to a series of notes using pitch detection?