How to Reduce Latency with ASIO driver?

Last year, got an electric drum set. However, I had no idea what I was doing, was faced with a problem, and eventually gave up and went back to my acoustic kit.

My problem last year was this:

Eventually, I found ASIO drivers and installed them on my laptop (not just ASIO4All drivers). But, the latency was still too high. The conclusion in that thread was that I should just get an external interface…but, I didn’t even know what those were, and I had already spent a lot of money, so I gave up.

However, I had to sell my acoustic drum set, and now I’d really like to figure out how to use my electric one. I don’t quite understand a lot of what’s going on, so I’d really, really appreciate detailed baby-like explanations.

I have a Roland TD 25 K electric drum set which I’m trying to use to trigger sounds in Kontakt 5 Studio Drummer. However, right now there is A LOT of latency, making my drum set unplayable.

I tried tweaking the settings… 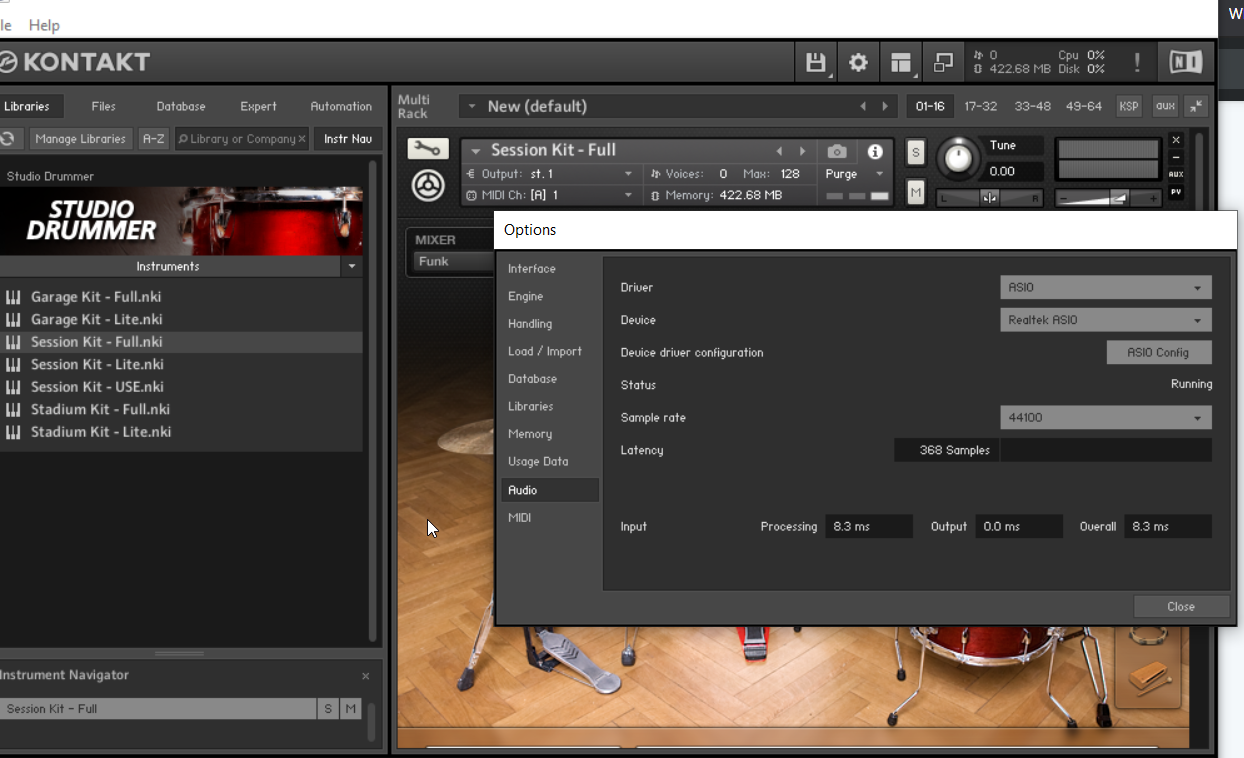 It doesn’t let me change the "latency" on this screen, but if I click on ASIO Config, I get this: 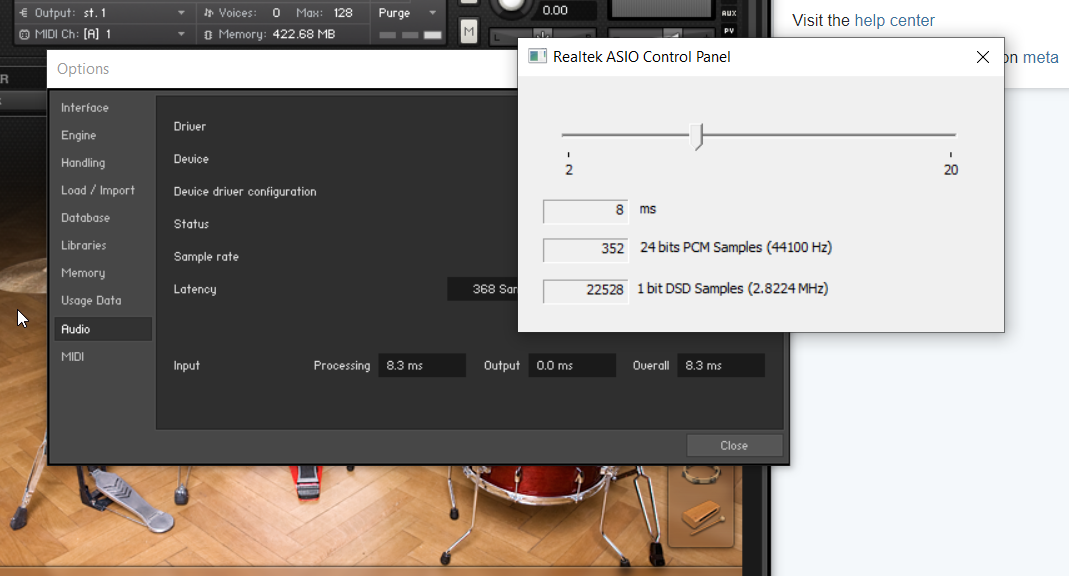 I’d really like to understand what’s happening (the difference between the two sample-rates, etc…) and what I should do.

And, if the solution is the same as it was to my linked question one year ago about the WASAPI drivers, I would appreciate any recommendations, along with an explanation of why that is the only solution…what’s wrong with my laptop?

Thank you so much. I’m sorry my question is a little vague, but I really am a newbie to this stuff, and its all quite confusing. If you need any more information please let me know in a comment.

Your problem is related to the drivers of your sound card as well as to the capabilities your computer has. Reading the thread from the link you attached I have to say that those people there explained quite well what is going on and what the possible solutions would be.

Generally speaking, and without going into too much detail, the rule of thumb on latency values is that the greater the buffer used, the greater the latency from input to output will be (and most probably any other processing related to that).

It seems that the software you are using is not capable of changing the sampling rate or the buffer size used by the drivers. You could possibly do that from the Windows audio control panel as is show in the thread of the link. Additionally, as stated there (in the link), the supported sampling rates depend on the hardware used (and quite rarely on the drivers - most probably this is not an issue nowadays). This means that, if your hardware does not support sampling rates other than 44.1 KHz and 48 KHz, then you are stuck with those.

Now, regarding the buffer size and latency, it seems that you can tweak those from the panel you present in the second picture. It seems that the slider refers to the latency (in ms) and not the buffer size, which may prove to be easier to use for you (since you seek a short delay).

The first value of buffer size refers to Pulse Code Modulation (PCM) coding while the second value refers to Delta Sigma Demodulation (DSD) coding. Without trying to explain those here (you can create a different question for that, or even better ask at DSP SE), in the former (PCM) samples are taken every 1/sampling-rate and they are quantised based on the bit-depth used (16-bit for CD quality, while 24-bit is quite often seen nowadays) and in the latter (DSD) the sampling rate used is very high (2.8224 MHz in your case as it seems) with one bit of coding. This one bit is used as the result of a comparison of the current analogue amplitude compared to the one of the previous sample (one if current amplitude is higher, zero if lower) and consequently, the values of "packets" of samples are summed (this is what the Sigma means in the DSD acronym) and from those a digitised PCM-like value is calculated.

Please keep in mind that this is a very vague explanation of each technique and a whole lot of details are omitted (on purpose) here. DSD has certain advantages against PCM like noise-shaping and ease of hardware manufacturing, while it has some drawbacks related to the unbounded error due to the summation operation (I do not provide references here but a quick search on IEEE or AES would provide some papers on all of those topics).

To conclude about your problem, you should try to minimise the value shown in the second picture until you get the lowest latency values without getting dropouts (clicks and glitches). I am not sure you should bother too much about the two different sampling rates as they are most probably calculated internally from the given values (and the sampling rate chosen from the Windows control panel, or any other place where you can control your hardware from).

Finally, getting an external audio interface would most probably improve audio quality, latency and possibly processing capabilities (as some of the processing will be moved to the interface hardware and the drivers will be tailored to your interface). Whether this is needed or not is up to you to decide. I would strongly suggest trying your luck with your current on-board audio interface and if you cannot work with that move to an external one. Alternatively, you could possibly borrow one and test it before buying one, to avoid finding out that what you bought is does not provide a solution to your problem.

Why does the piano sound of my keyboard sound so “odd” through my audio interface?

What type of microphone is best for a medium space room mix?

Recording sound and getting the frequency of any given point

Microphone recording problems where vowels are buzzing at a high pitch

How do you put a mic cable inside a rode boompole

How to relate audio PCM data to a dB SPL value?

Earphones: Can we use earphones and some other devices for professional sound editing?

Headphones: How are different types of headphones are made or designed?

Headphones: Can you use bass boosted headphones as professional sound editing headphones after making some changes in software or hardware changes?

Multi-channel recording of sounds in a car using multiple microphones

Does it matter if RMS meters hit red?

How is a hiss removed “under the hood”?

Mic closest as human ear (not just few inches away)

Do USB Audio Interface XLR Inputs show up as separate devices on Windows over the USB connection?