How (the heck) does SOHO's SWAN camera image the entire 4π sr celestial sphere?

was discovered by humans but using the SWAN camera on SOHO.

Earthsky.org’s Here’s how SOHO and a skywatcher discovered comet SWAN shows a GIF sequence of images from this camera from publicly available on-line data.

The movement of comet C/2020 F8 (SWAN) through successive all-sky maps as observed with the SWAN instrument on SOHO during the period from April 1 to May 9, 2020. Image via ESA.

This GIF also available at https://www.nasa.gov/feature/goddard/2020/new-comet-discovered-by-esa-and-nasa-solar-observatory which says:

The new comet was first spotted in April 2020, by an amateur astronomer named Michael Mattiazzo using data from a SOHO instrument called Solar Wind Anisotropies, or SWAN — as seen here. The comet appears to leave the left side of the image and reappear on the right side around May 3, because of the way SWAN’s 360-degree all-sky maps are shown, much like a globe is represented by a 2D map.

SWAN maps the constantly outflowing solar wind in interplanetary space by focusing on a particular wavelength of ultraviolet light emitted by hydrogen atoms. The new comet — officially classified C/2020 F8 (SWAN) but nicknamed Comet SWAN — was spotted in the images because it’s releasing huge amounts of water, about 1.3 metric tons (about 1.5 imperial tons) per second. As water is made of hydrogen and oxygen, this release made Comet SWAN visible to SOHO’s instruments.

Below are the kinds of moving images I’ve normally seen from SOHO’s fixed cameras pointed towards the Sun:

Above: from What exactly is the interaction that blocked Juno's data downlink near solar conjunction? Below: From This answer to What is this white dot and strange line in SOHO image? Yes those are the Pleiades whizzing past the Sun!

The answer is that it does it by scanning. There are two SWAN instruments, each of which sees an area of $5^circ times 5^circ$ at any one time: with a $25$-pixel sensor where each pixel is therefore one square degree. 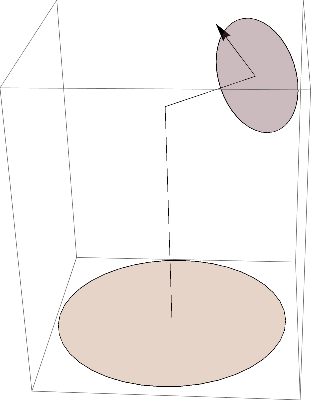 The camera is looking in the direction of the arrow, and the two rotating bits are represented by the two disks, and the second disk only rotates through the upper $pi$ angle.

However the camera actually sits down at the base of this assembly, looking upwards, with the light being directed down to it through two mirrors, one of which rotates with each assembly. I have not drawn these in as it got too hard to do the coordinate transformations.

To make life more interesting these mirrors are not plain: they are toroidal. The reason for this is that the mirrors do at least some (and I think probably all) of the focusing of the light, and using pairs of toroidal mirrors avoids astigmatism associated with spherically-ground mirrors. This is a neat trick.

And the final trick is that there is a cell full of hydrogen sitting in each optical path, which can be used to look for the Lyman-$alpha$ line in hydrogen. As mentioned in a comment, I thought I understood how this works, but I'm now not sure I do. Normally the hydrogen in the cells is molecular which means it does not absorb Ly-$alpha$. There are heaters in the cells which get them hot enough to dissociate the hydrogen in the cell, at which point it will absorb Ly-$alpha$. So I think they are using the difference between the state with the cell cold and that with it hot to infer how much Ly-$alpha$ they are seeing, as when it's hot they're essentially putting a Ly-$alpha$ absorber between the camera and the sky. But I am not completely sure about this.

Many of the references from the LATMOS pages seem to have rotted unfortunately as the project is quite old.