I was reading the comments in this Reddit and I’m confused. How will Sherpa and Formosat-5 be configured inside the Fairing, and then deployed. One comment seems to suggest that Formosat-5 is one of the objects that Sherpa will deploy, but it’s hard for me to imagine.

Will they be deployed together or separately? Are there any drawings or descriptions?

Plans for the launch were changed, and the Formosat-5 launch didn't have any secondary payloads.

A Spaceflight Incorporated rideshare payload, consisting of a SHERPA adaptor with up to ninety small satellites, had been scheduled to fly as a secondary payload however this was removed from the launch due to uncertainty over the launch date, after Falcon 9 was grounded towards the end of last year.

I'm leaving the original text here as it contains useful info on Sherpa.

I don't think Formosat-5 will be deployed by Sherpa. Formosat 5 weighs 525 kg, too heavy to be handled by Sherpa. Sherpa is made to deploy up to 5 satellites that weigh max. 300 kg each. It has 5 spots on its side where you can install small satellites with a separation mechanism, or a cubesat dispenser, each spot has a load limit of 300 kg. Because the 5 spots are in a radial position, you also have a size limit (the space between the Sherpa and the fairing).

The Sherpa contains a battery, computer/sequencer, GPS and transmitter. It provides power to the satellites until separation, and it controls the separation of each satellite. The Sherpa separates from the second stage before it starts dispensing its payloads. 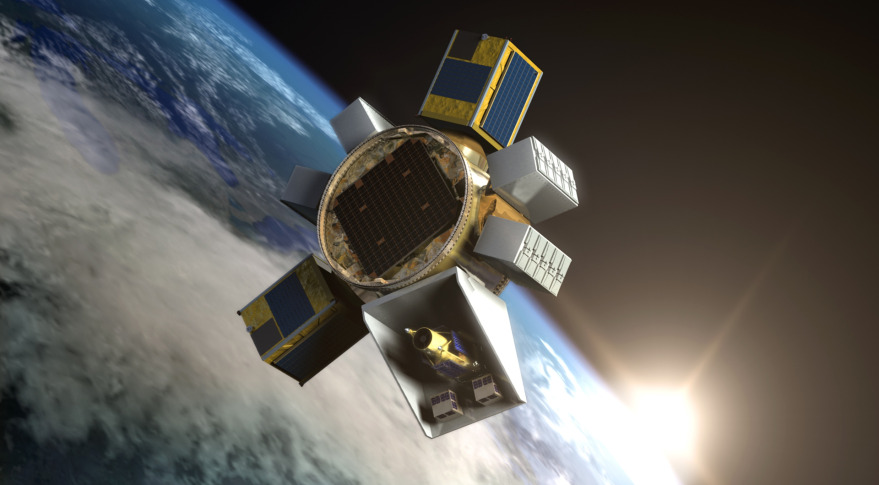 In this image, we're looking at the top of the Sherpa. The blocks around the side of the cylinder are the 5 smaller payloads or cubesat dispensers. This launch will carry 3 cubesat dispensers with a capacity of 84U each (7x12U), plus 2 small satellites.

This paper (by the company that built Sherpa) says the primary payload can be placed on top of the Sherpa. This apparently has a larger load limit than the 300 kg of the side spots. The Sherpa goes on top of the payload adapter of the rocket.

The Sherpa is based on the Moog ESPA Grande ring structure (the big cylinder in the image).

The ESPA ring, or the Evolved Expendable Launch Vehicle (EELV) Secondary Payload Adapter was developed to utilize excess launch capacity by mounting additional payloads below the primary spacecraft. This reduces launch costs for the primary mission and enables secondary and even tertiary missions with minimal impact to the original mission.

ESPA can accommodate up to a 15,000-pound primary satellite using the standard EELV interface plane bolt pattern, which is a drop-in component in the launch stack.

The primary payload separates first, then the Sherpa launches its secondary payloads.