If the SpaceX drone ship's camera feed gets disrupted every landing, why cant they throw the antennae off the ship on a buoy for better reception?

They mentioned on the live stream that this is because of the shaking antennae.

It has also been discussed on here before why this happens:
Why does the video feed always fail during Falcon 9 landings?

But that post doesn’t give a solution to the problem. It is asking why it happens, someone confirms this and we have confirmation from SpaceX why this happens.

My question is why can’t they just hold the antennae away from the ship? Put the antennae on a buoy. Throw the buoy into the water, let it drift away, and then reel it back when the falcon has landed. Cheap and reusable – the SpaceX way!

For SpaceX there is no drawback to having a brief interruption in the broadcast. The live transmission is for entertainment/PR purposes only, and they're already elbow deep in good PR so don't need any more.

The ASDS stores the video onboard. SpaceX often publishes the landing video later. Even for crash landings, with the stage exploding on the barge, the video recordings remain intact. The video is available for engineering analysis a few hours after the landing, which is soon enough.

There would be a significant cost to making sure the transmission is uninterrupted.

You can't use a buoy. There's a satcom antenna (i.e. a steerable dish) on the ASDS. You'd have to provide a reasonably stable platform for that antenna. So that means a boat or barge.

I've indicated one of the antennas in this image: 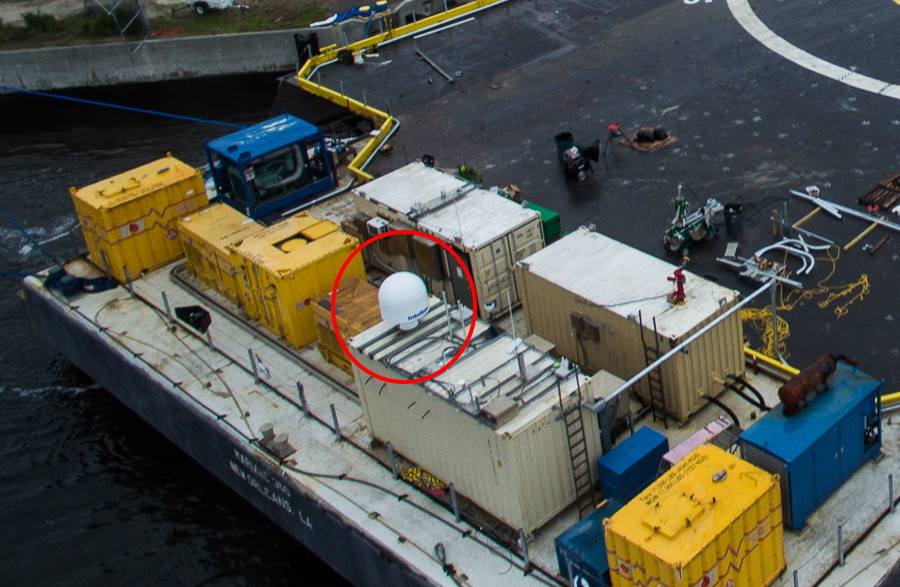 (original here) There's another on on the other side of the barge. They're pretty big (I estimate about 1 m diameter).

That boat means another item whose position needs to be controlled to make sure it doesn't crash into the ASDS. It needs an engine, an azimuth drive or two. Now the boat needs to be big enough to hold these.

Now, instead of recovering just the ASDS, the crew has to recover 2 vessels after the landing, doubling the workload. You need to tow the antenna boat, so that means another tug.

With all this, you still have a wireless link between ASDS and antenna boat. Can't use a wire (will get tangled in a propeller). So still a wireless link with a transmitting antenna that will be right underneath a rocket exhaust, and can be interfered with by the landing radar. A crash landing on top of the antenna will still take out the transmission.

So you'll spend a lot for no benefit. This is why SpaceX won't bother improving the live landing feed. Not until large-scale BFR operations become a reality and turnaround time needs to drop below 24h - then SpaceX might benefit from having the landing video available sooner for analysis.

UPDATE: It doesn't get disrupted completely on every landing!

For example here's the SpaceX video from the ANASIS-II Mission.

Pardon the ugly GIF, I don't know how to make a better one...

Come at it from a different angle --

What is the impact to SpaceX when they lose comms?

There is a momentary interruption in the stream. The livestream is impacted mildly. We have no signs there's a greater impact. We have evidence the impact is actually far more mild than what the public sees -- see the video wall over the hosts shoulder, where you can see the ASDS camera feed clearing moments after the landing attempt.

They are also concerned with telemetry as well as video - even more so, likely. However the ASDS has multiple shipping containers of equipment onboard that could very easily contain a ground station to store data during interruptions in the uplink. Also if the vehicle is recovered, they are likely to have onboard storage too.

So ultimately, you may have a solution searching for a problem. SpaceX doesn't seem to have any problems getting sufficient data from landings.