Ion thrusters need a lot of energy. But I don’t understand why. So, one thing I understand is that it takes a lot of energy to achieve a high exhaust velocity (since kinetic energy is proportional to velocity squared) but we get little momentum. This is all great. But, the energy required is coming from the grids. The charge present on these grids doesn’t change (due to ion optics), hence they can accelerate particles forever as long as the ionization chamber has sufficient pressure to let the ions enter the grid space. Now, it takes energy to ionize the gas. But when I calculated it, its not in kilowatts obviously.

The chambers’ walls are positively charged. The walls act like an anode and take in the electrons from the plasma. So, the thing that I was wondering about was whether the constant charging of these walls could take up that much energy. I then tried to calculate the energy needed to do this through the knowledge of the metals work function and found out that it requires less than 100 watts of energy. I am pretty sure this is wrong, but I don’t understand why ion thrusters are so energy hungry. 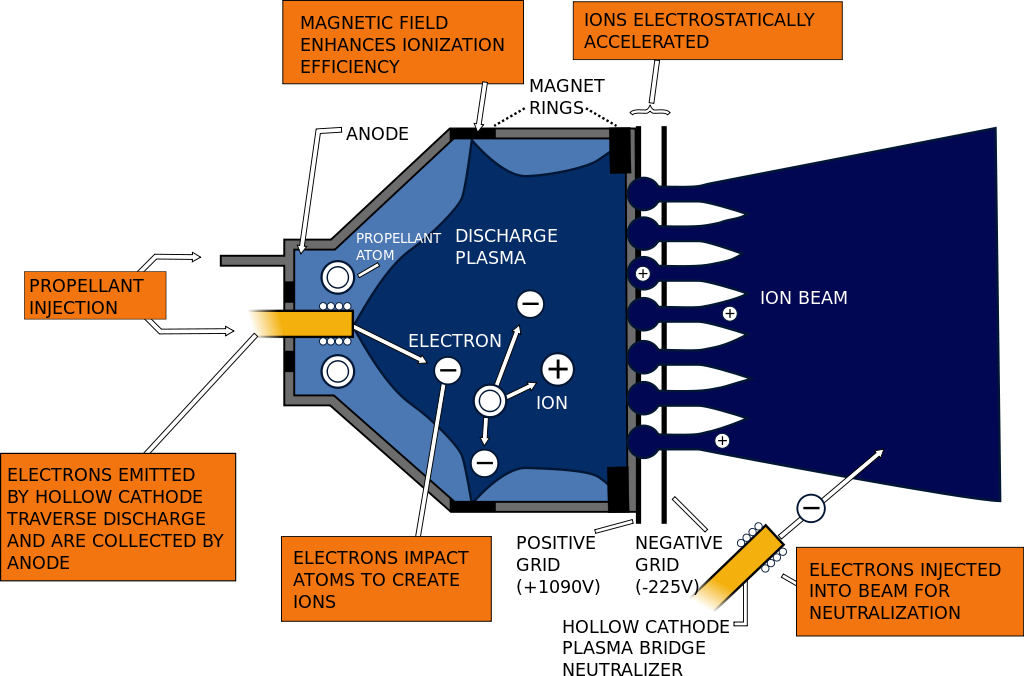 I am talking about what we are using energy for, and how it translates into the ion beam energy. Like ionization, etc; not how to calculate the energy needed.

The thing to notice about this type of drive is that the ions encounter the positively charged accelerating grid first. The ions that provide the thrust to the rocket are positively charged as well, so they will be repelled and contained within the plasma chamber. The ions' only means of reaching the interior of the accelerating grid is diffusion, meaning an ion must already have sufficient kinetic energy to approach and traverse the positive accelerating grid. If an ion does not have enough kinetic energy to get past the positive grid, it will be reflected back into the plasma chamber and not contribute to the acceleration of the rocket.

So, the power expenditure comes from keeping the plasma hot and dense enough to get enough ions into the accelerating field at a fast enough rate for the desired thrust. This would be true even in an ideal rocket with no losses due to heat loss to the walls of the chamber, charge loss on the grid due to ion/electron absorption, ion loss due to recombination, etc. If there were no power input, the plasma would cool off and thin out as it lost its highest energy ions to the exhaust (evaporative cooling). Eventually, the plasma chamber would have nothing but low energy ions contained by the walls and the positively charged grid, unable to escape.

On top of what is the primary cause described by others: about all exhaust energy coming from the electric supply, as opposed to chemical energy of the propellant, in more advanced ion thrusters like VASIMR there's one more "sink" for all that electricity.

Your normal chemical engine is made from superior alloys resistant to high temperature and high pressure, with active cooling system to keep them from melting and being torn apart - and all that for propellant energy an order of magnitude lower than what ion engines handle.

The ionized propellant, accelerated to dozens of kilometers per second, would act as an extremely hot, extremely abrasive plasma that would make a short work of any nozzles, grids, generally all solid structural elements of the drive. Simpler drives deal with it simply - let it happen, shortening the drive's useful life and putting an upper limit on achievable delta-V because before you run out of propellant, the drive dies. The more advanced ones use the only "material" that can handle this kind of conditions, and is fully, immediately "self-healing": the magnetic field. In VASIMR, for example, at no point past the ionization system does the gas ever touch the structural elements; it's entirely trapped within a whole, rather complex "plumbing system" made entirely out of magnetic fields.

...and you need a lot of electricity to keep these electromagnets running. After all, they must be strong enough to stop and divert particles moving at several dozen km/s - completely independently from all the power-hungry systems that accelerate the particles to these speeds.

The foundation of rocketry is Conservation of Momentum:

Also: energy of an object in motion is defined by the Kinetic Energy equation:

Note that the velocity term is linear in the first equation, and squared in the second.

If you, for example, doubled the velocity of your propellant and while you halved the mass, the change in momentum would remain the same, but the energy required to achieve that change would have doubled!

In some applications this is perfectly fine: it is expensive to put mass into orbit, so it can make sense to use a less "energy efficient" engine to save mass in propellant. Propellant speed also defines the upper limit in the rocketry equation, so higher end speeds are theoretically possible. In other cases, this characteristic is not desirable.

There is a sense in which the wonderfully high ISP of ion thrusters is the cause of their energy hunger, independently of the detail of their operation.

It works like this: we need a certain amount of delta-v (that's what a thruster is for after all) or more formally a certain amount of impulse $J$, and we are going to get it by throwing mass overboard. $$J = Delta m_text{fuel} v_text{exhaust} ;.$$ (Here we take $Delta m_text{fuel}$ to be small enough to neglect high order terms. This can be written in differential terms to formalize that, but it doesn't really change the argument.)

So, for a fixed impulse, using more mass of fuel requires less energy (neglecting the efficiency of the drive mechanism).

From this point of view, engines with very high exhaust velocities are worse rather than better!

But we use them anyway for several reasons. First, the tyranny of the rocket equation (with it's exponential dependence on mass ratio) overshadows other consideration, second launch from the surface requires high thrust at almost whatever cost and third the energy cost for chemical propellants is payed at manufacture rather than when rocket is operated and that means ground-side where energy is plentiful.

In terms of satellite and probe engines it is the mass-fraction issue that dominates.

First, I recommend you having a look at the section 2.6 of the book "Fundamentals of electric propulsion (...)" from NASA researchers Dan Goebel and Ira Katz. It is free on the internet and they show a pretty nice energy balance for a conventional thruster. Here is the link for the pdf: Fundamentals of Electric Propulsion.

Second, the equation to calculate the overall power consumption would be:

For example, for a thruster to produce 150 mN of thrust with a specific impulse of 2000 seconds, and a good efficiency of 0.8, the power consumption would be already 1.875 kW. This equation is demonstrated in the section 2.5 of the same book, and it is derived simply from the relation:

The kinetic power of the beam, called the jet power, is defined as

Some exercise questions about Tsiolkovsky’s Rocket Equation and Thrust Equation

Did UAE’s Al-Amal (Hope) Emirates Mars Mission (EMM) launch directly into an interplanetary trajectory or did it spend some time in LEO?

Why doesn’t the BFR/Starship have a launch escape system?

How rover landing is achieved on planets with very low atmospheric pressure?

Tutorial for orbits from TLE data

Could any modern launch vehicle have put Ulysses in it’s polar heliocentric without going to another planet first?

How does steel deteriorate in translunar space?

Is it possible to absorb energy from solar flares

Can I see the ISS from the surface with the naked eye?

First LED left on another planet⁺ by humans?

How is the software for scientific space missions developed?

Does the arrow in this STEREO trajectory animation point heliocentric prograde, or towards the Sun?

Why wasn’t the phosphine in Venus’ atmosphere detected by space probes?

How often have signs of life been dismissed as abiotic?

Would Dragon reenter safely if the nose cone stayed open?