Mars’ atmosphere is only .088 psi. Is that enough to cause heat at high altitude? Shouldn’t you be able to fly close to the surface at orbital speeds like on the moon? How does a parachute work with such little air? 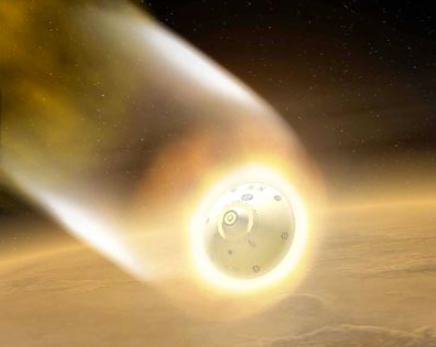 The aeroshell protects the rover from fiery temperatures as it enters the Martian atmosphere in January, 2004.

Already a lot of good answers, so just one additional aspect to the explanation:

When orbiting Mars, the vehicle has a lot of kinetic energy that has to be reduced to zero before landing. Coming from a low orbit, you have to somehow slow down from 3.5 km/s (8000 mph) to zero.

Over non-atmosphere bodies like the moon, the only chance to slow down is firing the engines in opposite direction. Of course, you can do so over Mars as well. Using your engines, slow down "outside" of the atmosphere, and the begin your thrust-controlled descent into the atmosphere and onto the surface. But that costs a lot of precious fuel.

A more fuel-economic way is to let the atmosphere do the braking. The downside is that your kinetic energy gets converted to heat in that process. You can't avoid that, there's no atmospheric braking without heat production.

And there isn't much freedom to choose different descent paths. An idea that comes to one's mind might be to brake so slowly that the resulting heat gets spread over a long period of time, thus not producing so high a temperature that a heat shield is needed. But that would mean to slow down more and more while staying in higher parts of the atmosphere. Good idea, but it won't work, as with less than the orbital speed you'll inevitably start falling down from the sky - you can't stay up there as long as you like.

So, the NASA engineers decided to make use of the atmospheric braking instead of doing a completely thrust-controlled descent, and to incorporate a protection against the inevitable heat.

Answered by Ralf Kleberhoff on September 29, 2021

The 'plasma blackout', where the spacecraft is covered in a blazing ball of fire and the heatshield plays the most important role, is between 90 and 55km altitude (300k-180k ft): 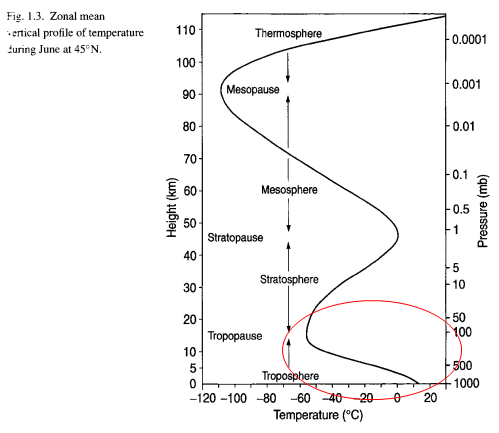 On Mars, these pressures occur respectively on 80 and 23km altitude - carbon dioxide atmosphere playing a role in different layout of pressure layers, but that still means the pressures where the heatshield is important lie well above Mars surface and a heatshield works just as well as on Earth, braking the spacecraft from space travel speeds to subsonic. 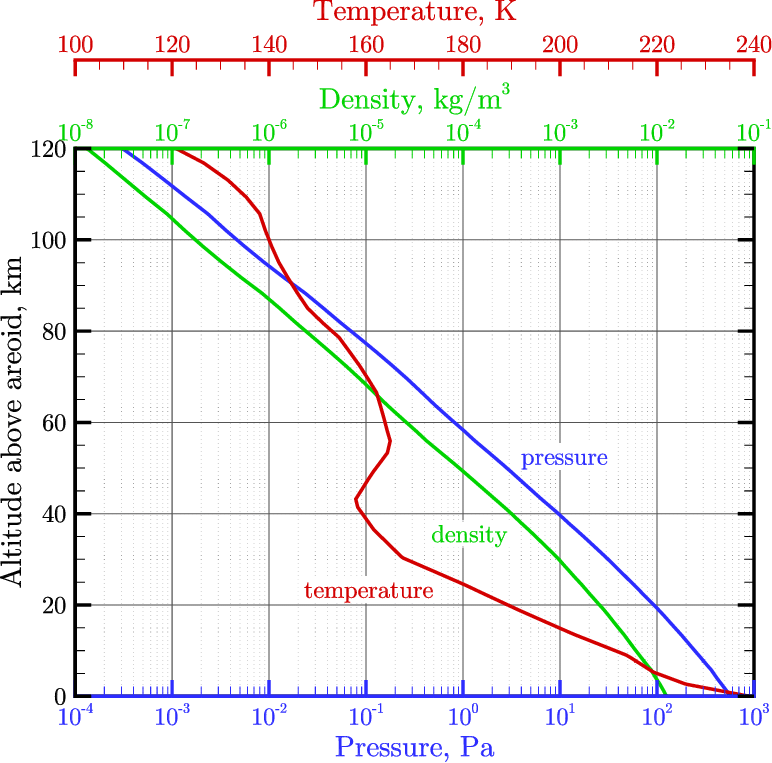 It's the parachutes that do really lousy job , requiring rocket skycranes or at least inflatable airbags on the payload for landing.

Based on this graph on Wikipedia, it looks like most probes entering the atmosphere of Mars get down to around 50 km before slowing down much. At that altitude, the air has a density of just about $10^{-4}spacemathrm{kg/m^3}$ (compare $1.2spacemathrm{kg/m^3}$ for sea level at Earth). For a spacecraft that gets to that altitude at 5.8 km/s (which Curiosity approximately did, and Pathfinder was much faster), you are sweeping through air carrying a kinetic energy load of OVER NINE THOUSAND kilowatts per square meter. (A well-designed aeroshell will only allow a fraction of this energy to heat up the surface of the heat shield.) This one second of air masses more than half a kilogram.

There is an atmosphere on Mars.

An atmosphere ~1% as thick as Earth's sounds like it ought to 'basically not count as an atmosphere' but 1% earth's atmosphere is still quite a lot of gas! The pressure of Mars's atmosphere is about ten million times larger than outer space.

I can't find it right now, but there's a quote about the Martian atmosphere, that says something like "Mars has just enough atmosphere to be a problem. It slows you down, but not enough to make landing safe".

Atmospheric reentry on Earth is considered to start taking place at the Karman line, which is an altitude of 100 km. The air pressure at that height is about a millionth that of sea level, and that's when you start seeing the effects of re-entry. Since Mars's ground level atmosphere is 10000 times thicker than that, there's no way of avoiding going through a significant amount of atmosphere on your way to land.

The craft carrying the Curiosity rover entered Mars atmosphere at 5.8 km/s. That's about Mach 17. Even a rarefied stream of gas will impart a huge amount of kinetic and thermal energy at that speed.

There is an atmosphere, as your screenshots point out. In fact, NASA is currently operating the MAVEN spacecraft (Mars Atmosphere and Volatile Evolution Mission) and ESA the Trace Gas Orbiter (TGO), both of which study Mars' atmosphere.

It's often said of Mars' atmosphere that "it's just thick enough to burn your spacecraft, but just thin enough to barely slow you down." Therefore, probes must use active systems to slow down the spacecraft before it reaches the surface. These range from retrorockets (like on Curiosity and Perseverance) to airbags (like on Spirit and Opportunity).

Some exercise questions about Tsiolkovsky’s Rocket Equation and Thrust Equation

Did UAE’s Al-Amal (Hope) Emirates Mars Mission (EMM) launch directly into an interplanetary trajectory or did it spend some time in LEO?

Why doesn’t the BFR/Starship have a launch escape system?

How rover landing is achieved on planets with very low atmospheric pressure?

Tutorial for orbits from TLE data

Could any modern launch vehicle have put Ulysses in it’s polar heliocentric without going to another planet first?

How does steel deteriorate in translunar space?

Is it possible to absorb energy from solar flares

Can I see the ISS from the surface with the naked eye?

First LED left on another planet⁺ by humans?

How is the software for scientific space missions developed?

Does the arrow in this STEREO trajectory animation point heliocentric prograde, or towards the Sun?

Why wasn’t the phosphine in Venus’ atmosphere detected by space probes?

How often have signs of life been dismissed as abiotic?

Would Dragon reenter safely if the nose cone stayed open?