What is the record for greatest number of athletes with the same finish time in one event?

On Sunday 10 July 2016 at the European Athletics Championships in Amsterdam, three athletes in the men’s 5000m final finished with exactly the same time of 13:40:85 (a fourth arrived only a hundredth of a second later!).

What is the record for the greatest number of athletes finishing with the same time?

I would like to limit the reply to international running events where the athletes start at the same time (i.e. not considering heats of athletes for the same event). 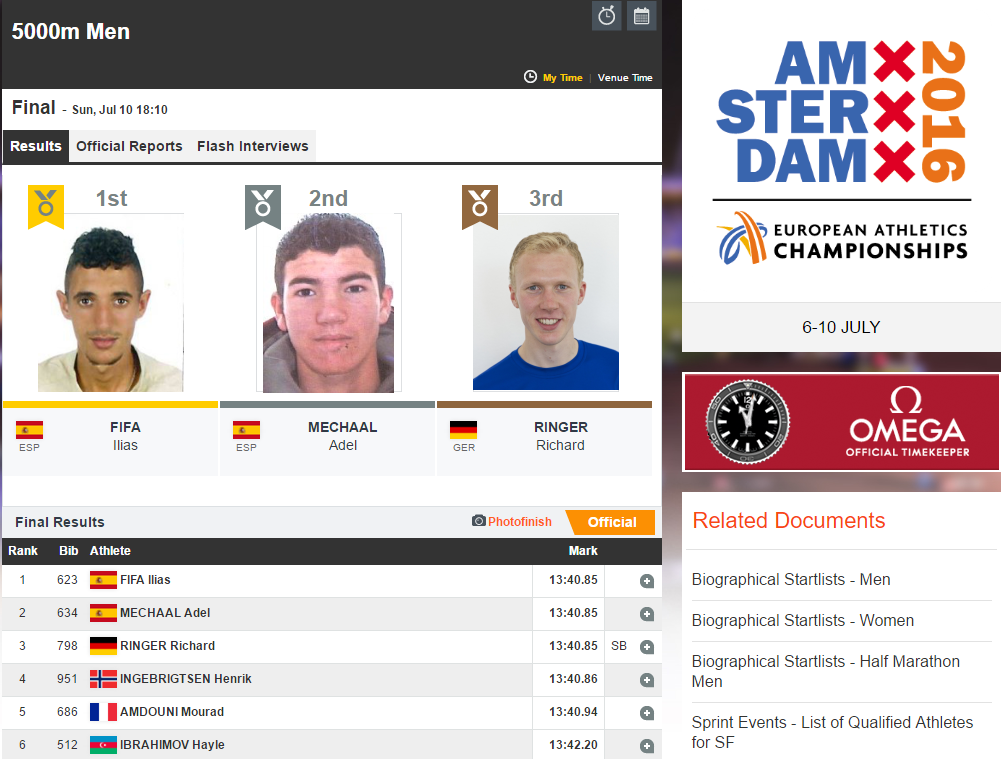 I looked for recorded instances of the same finishing time by more than 3 runners, and couldn't find any. As was mentioned in the comments, the race you referenced in your question was reported to 0.01 seconds. A quick online search showed that they eventually ruled based on the photo finish camera (those results can be seen in the photo you included in the question).

Based on my research, I'm fairly certain that at the 0.01 seconds scale, the instance you pointed to, 3 runners, is the most ever recorded. Another instance of this was in 2015, at the IAAF World Championships in Beijing. In the men's 100m, 3 runners, Tyson Gay (U.S), Asafa Powell (JAM), and Jimmy Vicaut (FRA) clocked in at 10.00 seconds (correct to 0.01s). Again, these runners were eventually ranked in fifth, sixth and seventh place respectively, based on the footage. Interestingly, at that same race Trayvon Bromell (USA) and Andre De Grasse (Canada) both came in at 9.92s. In this case, their results were declared a "dead heat", in which a judgement cannot be made, and a tie is declared. Both were awarded the bronze medal.

If we're looking for, as you originally wrote, "athletes finishing with the same time", and we're really after a dead heat that's declared as such, it seems that 2 runners is the most ever recorded. Other than Bromell and De Grasse, the most well-known case of this is the Tarmoh/Felix third place tie at the USA Olympic trials women's 100m in 2012. I know you asked for international competitions, and this isn't one, but I just think it's a great example of what happens in such an event. Since they could not be declared tied (only one of them could qualify and move on to compete in the Olympic games), they were given a choice between a coin-toss and a runoff. They both agreed to a runoff, but Tarmoh ultimately decided to withdraw from the runoff, feeling that she'd been wronged by the organization, and thus gave up the spot to Felix.

If you want to read more about these cases, and more broadly about the ties in sporting events and the discipline of timing and imaging (and its limitations), I highly recommend reading Jonathan Finn's article on the subject.

When calculating red zone efficiency, does a team need to have a first down in the red zone?

Where in MLB rules does it say batting gloves are legal?

What type of mathematics do you use in sports betting?

Why can’t multiple fouls be accepted by the offended team?

Has the NBA introduced any advantage for the home teams playing in the bubble playoffs?

Why don’t NFL defenders wrap up during tackles as much as they used to?

Is it possible to lose points while playing table tennis?

Nürburgring Endurance Version (with the Nordschleife). Why is the Yokohama-S used instead of the Mercedes Arena?

Could the batter get a walk when the catcher didn’t catch the ball?

What does “out round” mean in NFL?

In Le Mans, what is that second Timer on the timer board?

Why does Philip Morris continue to brand Ferraris with their Mission Winnow brand?

When a batter gets a hit, how does the scoreboard shows that?

How is it decided in hockey which team wears white or colored jersey?

What is this skill move performed by Neymar called?

Why could the fumble in the Browns/Jets game not be advanced?