Another problem with unload function, node set to null is repopulating somehow

I’m making a function to free a hash table from memory. At the moment, I’m only attempting to set the nodes to NULL to make sure that it’s iterating correctly. But I’m getting output that I don’t understand.

This is my current hash table:

This is my current output. It’s an infinite loop: 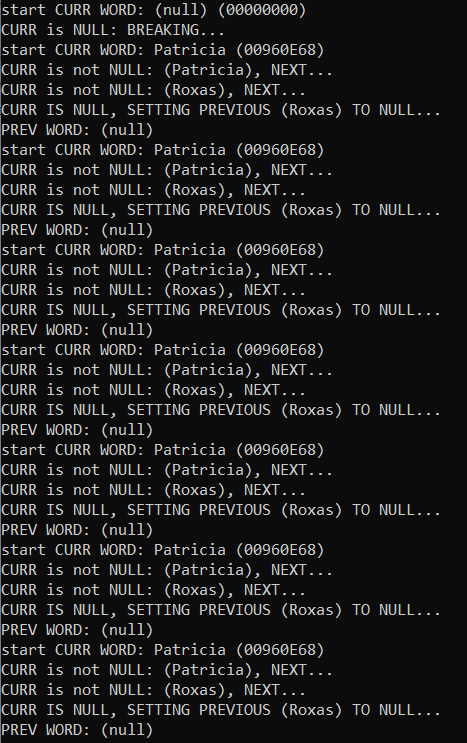 And this is my code:

The first if condition, if (curr == NULL), seems to be triggering just fine. table[0] is NULL, so it breaks the first iteration of while (1). What the rest is doing, I don’t understand. As intended, it will skip the first two nodes, landing on NULL. Then, apparently, it will set the previous node to NULL, like it’s supposed to. But in the next iteration of while (1), the node that it was supposed to have set to NULL is still populated, despite the command prev = NULL;, and despite the two print statements before and after that command (printf("CURR IS NULL, SETTING PREVIOUS (%s) TO NULL...n", prev->word); and printf("PREV WORD: %sn", prev->word);) triggering as well.

Can someone tell me what’s going wrong here? Why is the node that’s being set to NULL repopulating on the next iteration? Thanks in advance.

EDIT: Here is what I’m trying to achieve…

In which case, the second IF is met. It should set the head to NULL, and move on to the next iteration:

Now, the first IF is met, so it should break the while (1) loop and move on to the next iteration in the for loop.

The infinite loop is caused by the while(1) loop. At the top, curr is set to table[i]. In the loop, curr is set to null, but that does not matter because the break statement is never hit and curr is reset to the same value at the top of the loop.

I commented the code to help explain the flow:

Based on the updated post, this code should achieve the correct result:

Hyperledger fabric instantiate timeout because of internet speed, how can I use taobao.org npm image , not official image

How to query the max limit of the data through websocket with python?

How to get state variables from one component to another when i’m using history.push?

Parametrized types in Raku, how to use run time values as parameters

Warning: Inferring latch for variable ‘w_addra_t’ (in Verilog/SystemVerilog with FOR loop)

Counting the occurrences of a substring in a string python

Dependency Injection: How to get access to the corresponding ProductView that executes the Command?

Extracting keys and values from nested Object/Array in Javascript

How do i call API with multiple parameters in android studio