Jump Lists not showing for Office programs in Windows 7

I have a laptop running Windows 7 Home Premium. I installed Office 2010 on this laptop, and I noticed that Jump Lists were not showing. If I pin Word, Excel or PowerPoint to the taskbar or start menu, there is no Jump List menu where recent documents are shown and I can pin documents.

The Jump List menu does work (in both the taskbar and Start Menu) for Outlook and other programs like Windows Explorer and Skype. The feature never worked since I got this new laptop.

I used this feature all the time on my old laptop. Does anyone have any ideas about why Jump Lists aren’t showing for Word, Excel or PowerPoint?

Here is what I have tried: 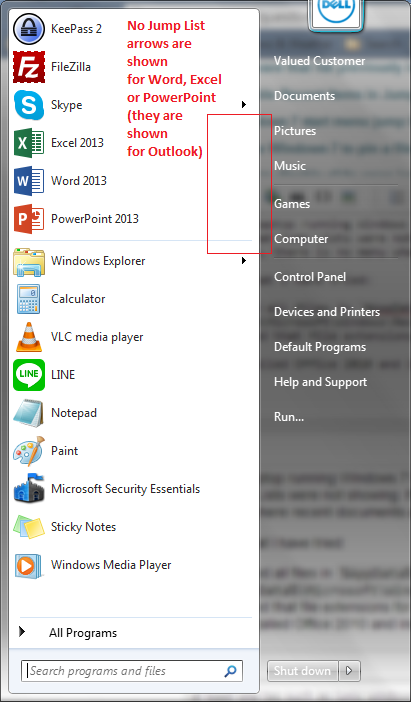 Looking around, I see that this has not been comprehensively solved yet. I continue to search for fixes for myself.

I now believe that the problem is related to file associations - particularly with starter versions. In my case, this laptop probably came preloaded with starter 2010, and I installed 2013 before uninstalling it.

I see registry entries still calling out starter even after it's long gone from my system, so I will dive at that. Hopefully some registry wizards will jump in and help out!

Well, I tooled around in the registry and saw what to fix in, but all of the new Office entries (not the file extensions, but the class identifiers and whatnot) were too much to wrap my head around. So, nuke solution, which employs built-in repair:

in /HKEY_CLASSES_ROOT, I deleted the identifiers that mentioned Excel (Excel, Excel.Chart, Excel.Sheet.12, etc.), Word, and Powerpoint.

For good measure, I also deleted the clusters of entries for Excel, Word, and Powerpoint file extensions (.xls, .doc, .ppt), which totaled maybe 20 for Excel, 10 for Word, and 15 for Powerpoint.

I believe that deleting and repairing the identifiers alone would be enough. I should mention that I've also tried the fix with clearing "%AppData%MicrosoftWindowsRecentAutomaticDestinations", so it might have to be used in conjunction with the registry repair. Hope this helps!

How do VS developers handle debugging to iOS from Windows?

How to get rid of “this script contains malicious content” error?

Is it possible to save to disk the past emails in Microsoft Mail?

Cloned SSD, how can I clone it again?

How to automatize a ssh tunnel over various hosts?

Can’t type text into table cell when form is protected

Using a function as the lookup_value for MATCH

Not able to install latest version of scikit-learn

PC works for a while then dies

Is it possible to share OS files between multiple VMs

During a long session, Windows 10 abruptly loses all USB ports and also ability to remote connect. Has anyone come across this issue?

Programmatically getting an executable’s Certificate Details