Experienced a weird issue with my Windows 8 system where it hangs and it is very unresponsive at random intervals of time (in fact, the first clue that I had an issue was when boot to desktop time was much longer than normal and desktop/startup apps took forever to load). My system would hang very often right when desktop begins to load in, and also when opening various web links or even at random intervals. (And by unresponsive, I mean that I can usually freely still move around my cursor and task manager is still shows moving graphs, but if I click within a program, the program will not respond to the command or it will be come "not responding".)

I’ve pulled up task manager to investigate during these periods of unresponsiveness correspond to when my C drive (my SSD) is at 100% activity, but 0 read/write speed. Checking "resource monitor" and "details" do not show any application using the disk to cause the 100% activity. In fact, at times during 100% activity, in "resource monitor", the processes list slowly decreases until there is nothing there, and then resets itself.

I’ve also attempted to play games and have task manager on the side to see what effect this would have. At several points, I would encounter the same "100% active, 0 R/W speed", but the game DOES NOT hang and I can game fine. However, if I were to click on let’s say a web browser or a file explorer window, while gaming and having the "100% active, 0 R/W speed", it would respond to 1-2 click actions and then hang.

When I was typing this up, I experienced "100% active, 0 R/W speed" several times, but sometimes, I can continue typing and then randomly, the browser becomes unresponsive.

What I’ve tried to fix it:

This shows a period of normal activity, and then unresponsiveness right when activity hits 100%: 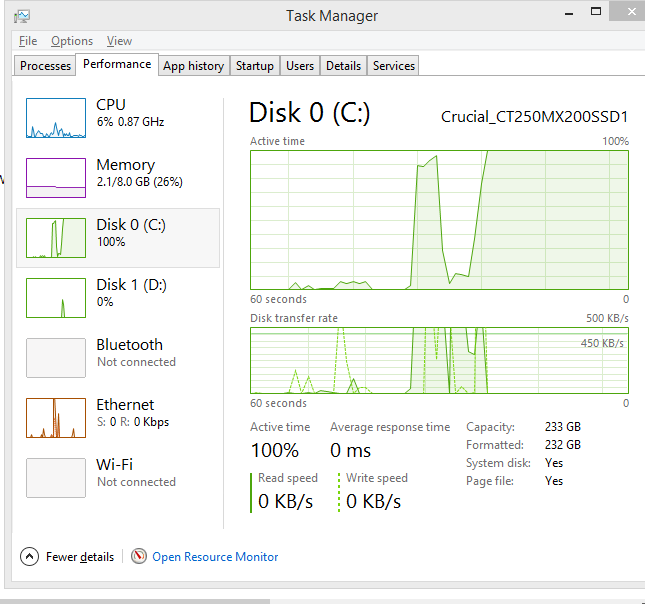 During 100% activity, what resource manager shows (the processes list decreases and eventually, results in the picture below): 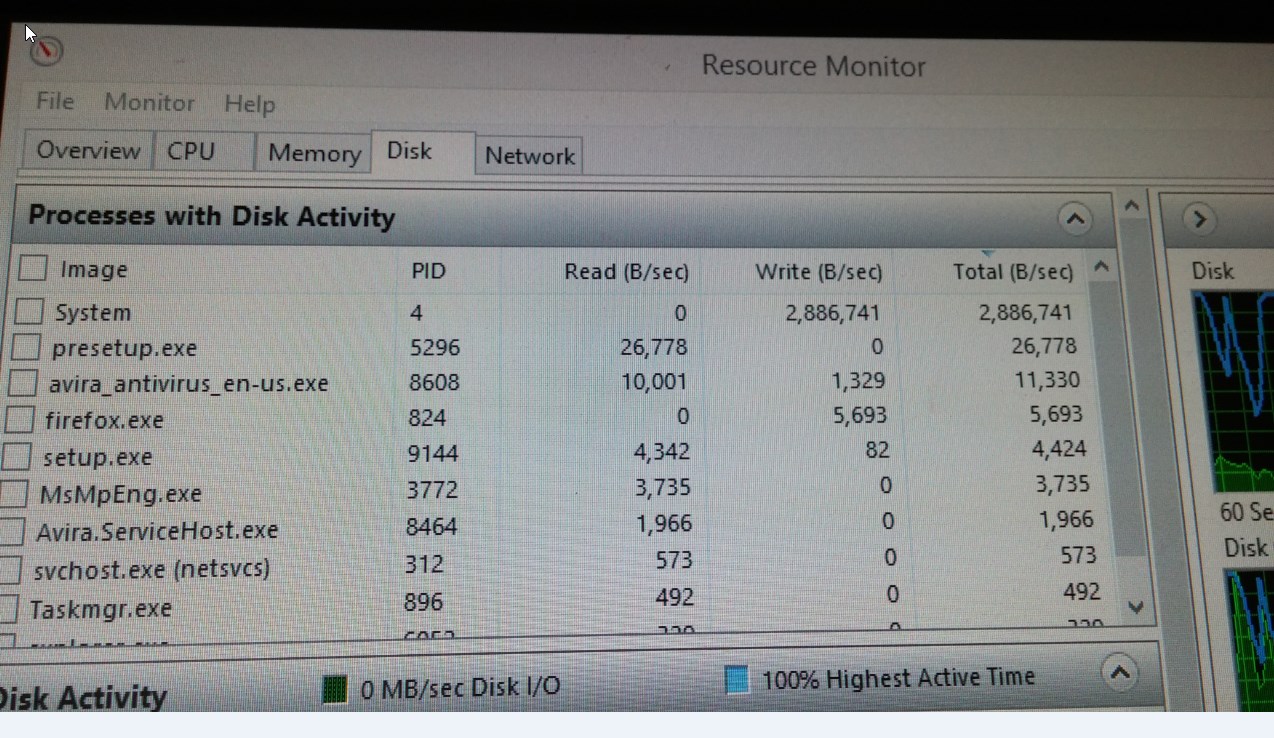 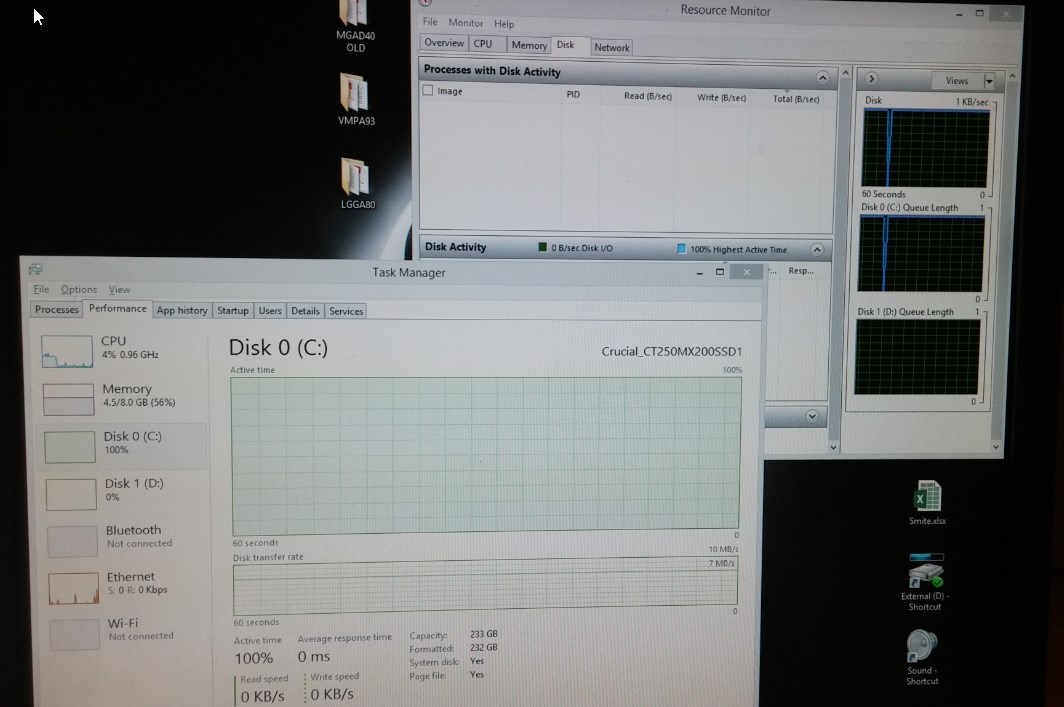 I have performed a fresh installation of Windows 8.1 after formatting my drive. Initially, everything look good. I had sequential reads and writes of 450MB/s + with no hanging after running benchmarks.

Gaming also had no errors.

However, when I was gaming + copying files from my external drive to my SSD, I started getting the same hanging issue again and watched task manager indication of disk activity go to 100% and lock up the drive again.

I also just tried a Short SELF test, it locked up again in the middle of it, but it completed with a pass.

The usual suspects: Power supply, Motherboard/Disk controller, memtest, CPU (probably not but could be....)

Replace sata cable, swap to a different power cable, try different port on sata controller and/or swap drive to a known working computer and do chkdsk /f or other diags.

Answered by Solarsails on January 3, 2022

Please try to boot in Safe mode and see if the issue persists.

If it does not, that means a program or service from startup is using the disk.

This could either be a malicious program or an antivirus/antimalware program such as Malwarebytes. Next steps would be to go to:

If you cannot figure it out, just disable everything in both settings then start enabling them one by one and restart. When the issue comes back, you found the culprit.

Incorrect cable connection or faulty cable does not cause 100% disk usage, it causes disk errors (first hand experience with this) and windows explorer hanging while accessing files / writing to disk.

A few other options to try is to:

Answered by CrazyEyesDave on January 3, 2022

Note that if your drive reports Ultra-DMA CRC Error Counts, you will see a cumulative number of errors over the lifetime of the drive. It will never go down. When it stays at the same value, it means that no new errors occur. When it increases, errors are present. So be sure to write down the current value when you wish to check whether a new cable makes any difference.

I have had these issues on and off on my laptop. Figured some windows services were putting some extra burden on the SSD (OS task management issues IMO). One thing that helped was disabling Windows Search and/or Superfetch.

Run CMD as administrator and type in the following:

If you observe the usage plummeting, and like it that way, you could go to services (run services.msc) and stop these services for good.

Superfetch is the windows service to ensure a faster experience by putting the frequently used data from the drive to RAM. But since it has to copy the data to RAM first, it can cause enormous lags. (I observed my PC hanging when I left it idle for sometime. Maybe that's when the Superfetch kicks in.)

Windows Search is the search manager that is responsible for indexing and such functions. Sometimes building indexes can use a lot of drive resources. But usually it runs fine and is very helpful.

None of these tweaks is very recommended - but if they help that's good. Disabling windows search will - well, disable windows search. You can start it again by typing in the following.

In most cases, I reckon, disabling Superfetch would be enough. Your call. Best of luck.

I had exactly the same issue on my notebook with SSD Crucial MX100 256GB. I didn't manage to find a solution or at least a reason of these very annoying freezes. When I inserted this drive to desktop PC it worked just fine without any freezes. When I was researching this problem I was finding only more and more people reporting the same problem but without any working solution. After that I inserted another SSD to my notebook - Samsung SSD 840 Evo and it worked fine. That's why I think there was a problem with power.

I didn't see if you use notebook or desktop PC, sorry if I missed it. As I mentioned above, the possible reason of SSD freezes is that this SSD requires abnormal power supply. Another possible reason is that the procudent of notebook limited power for mass storage devices because they didn't predicted that consumer might replace original components.

If you are on desktop PC I think the problem could be with power line as Jamie Willetts said in comment. Replace it and check again.

I felt very disappointed when I saw that another SSD works fine. In my opinion, a hardware maintainer should inform consumers that their device requires higher power because it is obvious that there could be problems on devices like notebooks with limited power. I would replace it or return to a resseler if I could.

Answered by Sebastian on January 3, 2022

how to know the capacity of a shared drive

Always use laptop mic when headset is plugged in

What does this error message mean? Error in invocation of storage.set(object items, optional function callback): No matching signatures

How to Clone OEM Recovery Partitions

How to record entire screen on Windows 10?

Could not find the program ‘konsole’

New monitor: what are these artifacts or distortion?

How to add audio to video using ffmpeg on Linux?

How to reset bios on Toshiba L870?

why alias names defined in .bashrc file are not working?

How do I modify Chromium’s default data directory?