I am trying to do the following. I would like a part of my source to be compiled normally but to generate no output. In particlular, I would like references made to the ghosted parts to be produced the same results as if the parts were not ghosted.

I know this sounds bizarre and I have not seen anything doing something like that.

I would have no trouble with a solution that does not process floats in the ghosted parts.

Here is an idea of the code I would like:

that would produce the following output (once the ghost environment works): 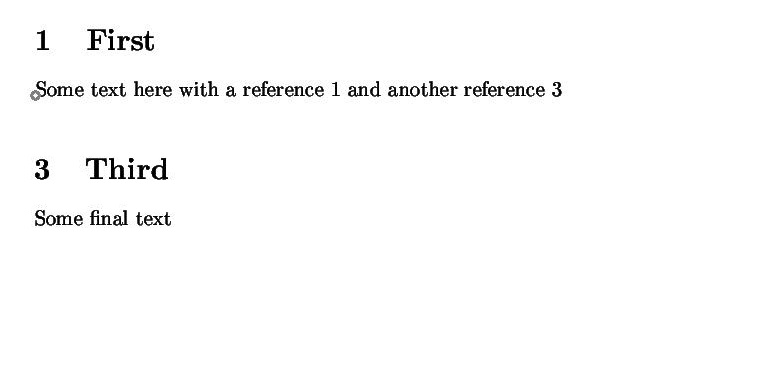 EDITED to actually work (I think).

My approach is to create a ghost environment whereby I stick the ghost material into a box that isn't printed. I first tried it into an lrbox, but that choked on labels. So I had some success using the bad syntax of setbox0=vboxbgroup...egroup. I figured that since I wasn't typesetting the material anyway, the bad aspects to the formulation may not be fatal.

This worked well at actuating the sectioning information without actually printing it, so I was halfway to solving the problem. However, executing label in a box also broke things.

So my solution was to grab the meaning of label and rather than executing the code in the box, I would just xdef the code to an indexed macro (LBLi, LBLii, LBLiii) for each invocation of label. Then, upon exiting the box, I would cycle through a loop executing LBLi, LBLii, LBLiii, successively, to actually execute the label code outside of the box.

With a little effort, I got it to work. What label is supposed to do is write the following evaluated line to the aux file:

so that the actual aux file contains something like newlabel{eq:one}{{1}{1}}.

My EDIT involved using an xdef instead of a gdef in the definitions of LBLx, with noexpand preserved on thepage. The xdef allowed the proper value of @currentlabel to be employed.

Here is my MWE, which works for the label numbers. It seems to work for the thepage, as well, which can be tested in my MWE, by uncommenting the vspace* line.

RE-EDITED to incorporate newififghost, per touhami's comment to the question. Setting ghostfalse near the top of the preamble will cause the compilation to ignore ghost and compile the full document. With ghosttrue, the ghost sections are omitted, but hopefully accounted for.

For this MWE, the aux file is written as

I decided to sum up the differences between Steven's solution and using include/includeonly (as suggested by Ethan Bolker) in a separate answer. I didn't really do a thorough comparison with Steven's solution, so if you find anything else, feel free to add to this post.

pdfLaTex – do not compile when line too long

Define macros from a list processed by the listofitems package

How to cite reference with Bibtex buy using JabRef when there is Turkish in the citation?

Reverse TikZ stroke direction to use with fill rules

My cite command doesn’t work: how to fix that?

How to make standalone package available by my LaTeX installation?

What part of tikz manual to read for contour integral plots

Equal length to vertices in feynmf

Converting to bibitem in LaTeX

Use eso-pic to set pictures on most pages