I have a strange problem where my audio is very low, muffled and distored after exporting it from premiere pro. I tried a huge amount of export settings with different bitrates and and sample rates but nothing fixes it.
(Always H.264 for video and AAC for the audio)

I have to note that the problem appears not to everyone. On my mac and smartphone it sounds fine, when others play it on their devices over social media it sounds horrible. How can that be?

Filming and audio recording was done with the Sony a6300 and boom mic. Recorded audio has 2 channels at a sample rate of 48000khz.

Has someone a suggestion for this problem?

Might be because you are exporting a stereo audio file which has one channel phase reversed, and then it is being played back in mono.

If you have an identical signal going to the left and right channels, but one of them is phase reversed, it means the waveform is inverted (upside down). When you listen to either channel on its own, it will sound normal. When you listen to them both in stereo (Left channel to left speaker, right channel to right speaker) you may notice it sounding odd. Some people describe it sounding like the location of the sound is "inside their head".

But when you play back a stereo recording like this in mono (left channel and right channel both mixed togther to a single mono output) the signal will completely cancel itself out.

If the two channels are almost identical, but have tiny differences, only the differences will be audible. This often happens with lossy file formats (like mp3/mp4 files), where the mono version of the phase reversed playback sounds tinny and lacking in all bass.

To test it out, try adding a channel mixer effect to the master output of you mix, and inverting one channel. Then export again and see if it fixes it. 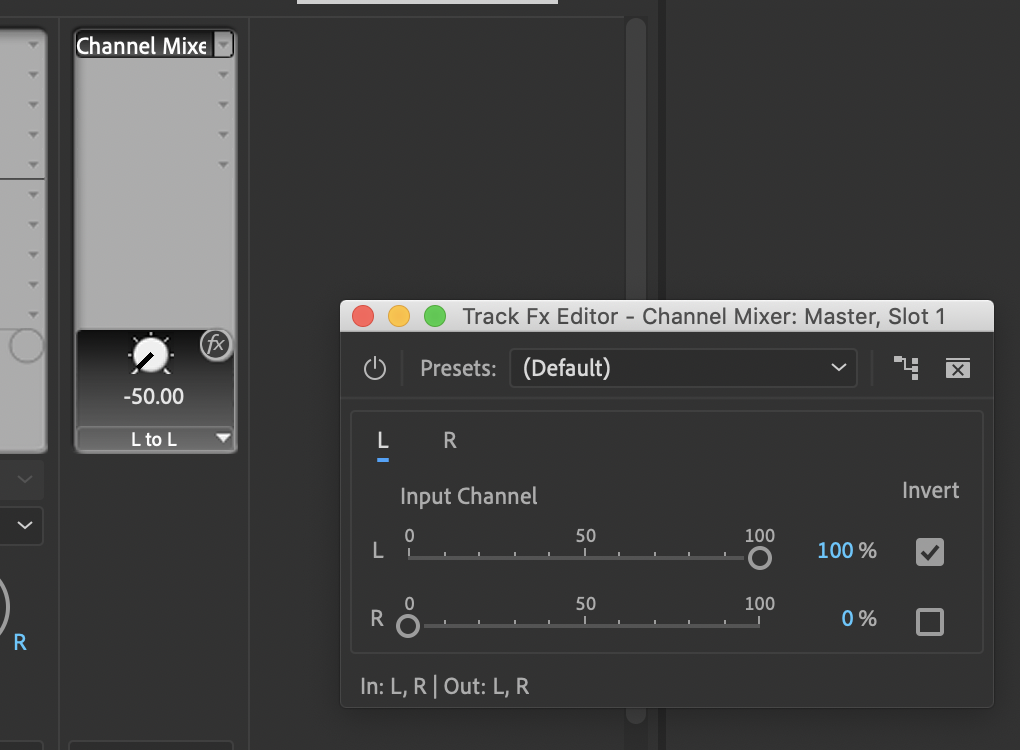 How to filter out overlapping audio? Given a mixed track and one stem track, what’s the best way to “subtract” the stem from the mix?

Can ffmpeg calculate a new starting keyframe when being asked to split/copy on a non-keyframe?

Why Camtasia always produce video with a low quality, even if I record in 1280p, for example?

Rotating image/video about an axis within xy-plane in FCP

Where are the Source Scaling Options in Adobe Media Encoder CS6?

Injecting/embedding/adding/writing metadata to a .mp4 file so it’s recognised as 360

how can I convert slow motion video into normal speed without losing fps or audio sample rate?

Easiest way to create video with multiple videos on loop

Increase Volume of a specific mxf channel with ffmpeg

Is it possible to search all markers in Premiere?

How to apply multiple chroma keys in ffmpeg?